I have spent a long time developing a technique that corrects the face as natural and as optimal as possible, while minimising the risks and the hassle. The Enbloc facelift is the result of this quest. This technique is especially designed to ensure that people notice that you look great, without realising why.

Often people come to me because they feel their face doesn’t reflects anymore how they feel inside. When we communicate, we subconsciously react to what others radiate. We respond to a face as a whole, where we see a friendly, persuasive or charismatic person, a sad or tired person, long before we can tell what specific features account for this intuitive impression.

This is important to realise, as it clarifies why optimising this impression requires a holistic approach. Adjusting only one part of the face can easily create an unbalanced and thus an unnatural appearance, which others will notice instantly. They will start to wonder what it is that makes them feel something is wrong, which will completely distract from the conversation you are having.

So when optimising the face one should be careful not to disturb the balance of the face. This is why a personal analysis is so important, as it will make clear what the best choices are for your face.

From what age are facelifts performed?

Age related changes often only become noticeable when laxity of skin starts to become a factor. Tissues drop down over years (like jowls or bands in the neck) and thus give a more tired or worn appearance. This process usually accelerates between 40 and 50 years of age, which is when facelift surgery starts to be beneficial.

The longer I’ve been doing this, the more I realise prevention is better than renovation. The longer you wait, the more difficult it is to surgically optimise your face in a natural way. This is the reason why I take the Enbloc facelift into consideration from the age of 45. In some people skin laxity only occurs at a much later age. But one thing is sure: once the skin shows laxity, the best option is a structural solution by facelift surgery.

The Enbloc facelift is the ideal technique to correct a face in a natural way.

In my experience most frequently used facelift techniques either do not have sufficient effect (S-lift, MACS lift) or are too drastic (Deep plane facelift). With these techniques people are often not presentable for weeks or even longer, after which it is not uncommon for them to look tight and operated.

The Enbloc facelift technique was developed to improve on this. The goals were:

1. to achieve the most natural effect possible:

2. to minimize the impact of the process:

One of the main reasons why the impact of this operation is so minimal are the relatively short incisions I use. The scar starts just above the ear at the front and then continues behind the entrance of the ear down and around the earlobe, and then stops after 2cm behind the ear. It falls into the folds of the skin and behind the auricle, making it virtually invisible in the long term. 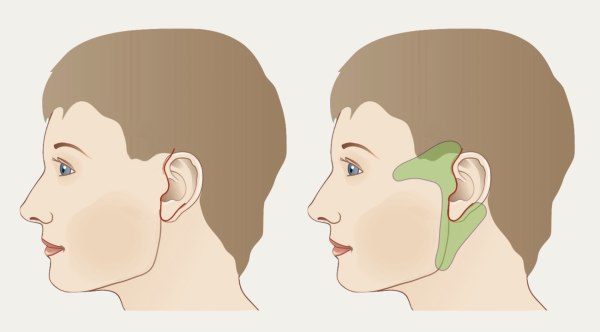 All the steps of the Enbloc facelift treatment

All the phases of a correction via the Enbloc facelift are explained in more detail below. My recommendation would be that you read this information carefully and contact me if any questions arise. I wish you a good recovery!

If you want to know more about this and in particular want more information about what this could imply for you, please contact me to make an appointment.

Anaesthesia
Sedation or local anaesthetic
Duration of the procedure
2 tot 3 hours
(How long) Will the scars be visible?
The scars of the facelift are barely visible. The scars in the upper eyelid are somewhat swollen in the first two weeks. They quickly become less noticeable, but the part on the side of the eye socket will remain slightly red for 4-6 months. Ultimately, the scars fade so that they appear as normal skin and no longer will be visible.
When can I resume with my social life?
After 1-2 weeks, although the scars might still be noticeable then when pointed out.
Sensitivity
It is common to experience some tightness in the first month.
Back to normal daily activities
After 1 week
Return to normal sports activity
Within 2-4 weeks, depending on the type and intensity of the activity. Particularly bending down can still be troubling.

Disclaimer: Surgical intervention and the healing process are subject to many (individual) variables and therefore cannot be fully predicted. This information is only intended to help you better understand the process. No rights can be derived from it. Keep in mind that reality may be different in your case. If in doubt, please contact Dr. van der Meulen.